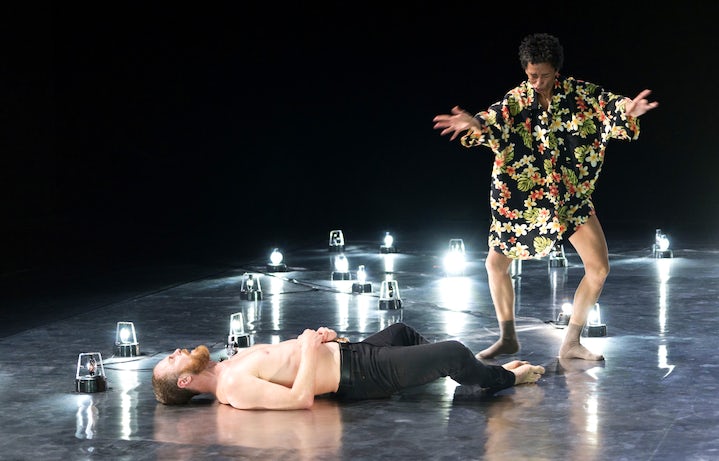 …What would happen if, rather than reaching a goal, an end, a measure, a cyclical rhythm, dancers were counting the way one does when falling asleep, or dying, the way one looks at the stars extinguished by light pollution?… What would be the number if it were to mark abandonment, passage, an infinite metamorphosis?...’ – BORIS CHARMATZ

For centuries, dancers have been counting their steps to 4, 6 or 8. Nowadays, this happens in even more complex ways. But what if dancers were to count to infinity? Infinity as a concept connects us to that which transcends us. The stage is a place that can make this transcendence possible. Bodies may look finite, but human motion is above all a potential.

infini by Boris Charmatz and five dancers is premised on the ubiquity of numbers. ‘I have always hated counting while dancing. I prefer to let my mind wander. In this piece, we count, speak and sing not only so that we can dance, but first and foremost, so that our minds can wander even more.’ In a world that is being increasingly enslaved by algorithms, Charmatz offers a moment of infinity.

• Dancer and choreographer Boris Charmatz is one of the key figures of contemporary dance in France and Belgium. In 2009, he became the director of the Centre chorégraphique national in Rennes and renamed it the Musée de la danse. Since À-bras-le-corps in 1998, he has been a regular guest at Kaaitheater. He made a big impression with the productions Aatt enen tionon, Flip Book, and – during Performatik13 – brouillon.